How do you Value a Dot-Com?

Twenty years ago today, Tom Strezos — currently a Senior Business Advisor in the Valuations Group at Grewal Guyatt LLP — wrote an article published in The Lawyers Weekly on valuing a Dot.com. In this article he valued the then struggling internet start up company, Amazon. Tom thought his assumptions, in 2001, were “crazy”  and valued it at 3x the then market value of  $5B. With the passage of time, those “crazy”  assumptions weren’t nearly enough as it’s value today is in excess of $1 trillion…… but with hindsight, who would have known. We hope you enjoy the read on how to value a start up company and the valuation of Amazon 20 years ago.

Originally published by The Lawyers Weekly, LexisNexis Canada Inc. (with permission to distribute)

Stickiness. Eyeball counts. Mindshare. Clickthrough. All of these are new, and in some cases loopy, ideas that have been used to ascribe value to a “dot.com”, businesses that exist primarily to do business on the Internet. At least until the tech stock meltdown of last year (2000), it seemed that old-fashioned ideas like “profits” were considered a bad thing, because having profits meant that a company was not reinvesting its earnings in itself. Much of that came to a halt with the meltdown, and now these companies are under pressure to demonstrate that they have a viable business model that includes reasonable expectation of profit. 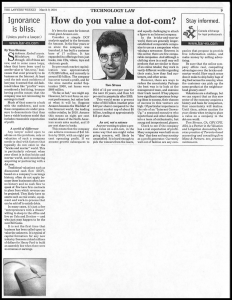 Any lawyer called upon to advise on the purchase, sale or valuation of such a company needs to deal with factors that typically do not exist in the “brick-and-mortar” world. This is particularly relevant when your client is in that brick-and-mortar world, and considering acquiring or partnering with a dot.com.

Traditional valuation approaches, such as capitalized earnings or cash flows based on a company’s historical operations, often do not apply, because these businesses have no history and no cash flow to speak of. Few have firm contracts in place from which revenue can be projected. They likely have no assets, such as real estate, equipment and work-in-process that can be sold off to satisfy debts.

In many cases, it’s just a few “entrepreneurs with a dream” who are willing to sleep in the office and live on Cola and Doritos – and who just may happen to be the next Bill Gates. It is not the first time that business has been called upon to value the unknown. It is typical of capital formation for any new industry. Someone risked millions of dollars for Henry Ford to build an assembly line when there was no revenue or earnings.

It’s been the same for Internet retail giant Amazon.com. Consider a simple Discounted Cash Flow analysis applied to the forecasts for Amazon. In the four years or so since the company was launched, it has built a customer base of 17 million. It has expanded its offerings from just books, into CDs, videos, toys and electronic goods. Its pre-crash market capitalization was approximately $25 billion (in USD), and currently is around $5 billion. The company has never turned a profit, and for the nine months ended September 2000, net losses were 886 million.

“So far, so bad,” one might say. However, let’s not focus on current performance, but rather look at what it will be. Suppose Amazon becomes the Wal-Mart of the Internet world, the leading online retailer, by 2010. Assume this means an eight per cent market share of the North American music sales market, and 10 per cent share in books.

This means that the company can achieve revenues of $41 billion by 2010, with an eight per cent operating profit. If we assume growth subsequent to 2010 of 12 per cent per year for the next 15 years, and then 5.5 per cent in perpetuity after 2025. This would mean a present value of $15 billion (market price $42 per share) compared to the current market cap of about $5 billion, trading at approximately $15 per share.

Anyone wanting to place a precise value on a dot.com, in the same way that one might value going concern, will likely be unsatisfied. It is hard enough to pick the winners from the losers, and equally challenging to attach a figure to an Internet company. In the brick-and-mortar world, there are generally longer established comparable companies to use as a comparison when valuing a newcomer. However, in this sector, there are few comparable companies. And although a clothing store in a mall may sell products that are similar to those of an online retailer, they work in vastly different worlds regarding their costs, how they find customers, and other areas.

However, there are ways to reduce the uncertainty. Perhaps the best way is to look at the management team, and examine their track record. If key players have significant experience bringing ideas to success, their chances of success in this venture are high. Of particular importance is the role of an “Internet GrownUp,” a seasoned executive who injects fiscal and other discipline into a team of enthusiastic, but young and inexperienced, players.

Check to see if the company has a real expectation of profit. Many companies were built on an “idea” that does not bear scrutiny as a profit generator. Currently well out of fashion are any companies that propose to provide free information online, and make money by selling advertising. Be sure that the online company offers real, compelling advantages over the brick-and-mortar world. How much sense does it make to ship bulky bags of dog food across the country, when the customer can pick up the same product at the neighbourhood grocery store? Valuations are a challenge, but we can expect that as this new sector of the economy acquires a history and basis for comparison, that uncertainty will decline. Until then, advise caution for your clients when trying to place a value on a company in the dot.com world.